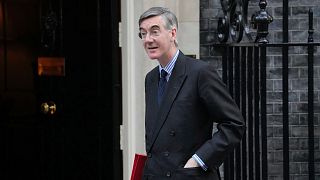 The UK government has conceded that its plan to cut carbon emissions is inadequate, and must now come up with a better one.

It has cemented the victory of environmental lawyers from ClientEarth, Friends of the Earth and the Good Law Project, who are calling the decision “an embarrassing but welcome climbdown”.

The trio of NGOs successfully argued that the Department for Business, Energy and Industrial Strategy (BEIS) failed to show how its policies will curb emissions enough to meet legally-binding targets next decade.

This decision is a breakthrough moment in the fight against climate delay and inaction.

“This decision is a breakthrough moment in the fight against climate delay and inaction,” ClientEarth lawyer Sam Hunter-Jones said of the ruling.

“It forces the government to put in place climate plans that will actually address the crisis. It’s also an opportunity to move further and faster away from the expensive fossil fuels that are adding to the crippling cost of living crisis people are facing.”

Here’s what you need to know about the landmark case, and where it takes us.

How did the UK’s net zero strategy break the law?

The UK government released its strategy to reach net zero by 2050 in October last year. By the deadline, the amount of greenhouse gas emissions the country releases should not exceed the amount it is removing from the atmosphere.

‘Carbon budgets’ are key markers on this journey - set limits on the volume of greenhouse gases the country can emit over five year periods and still hit its target. These are legally binding under the national Climate Change Act of 2008, but the government could not demonstrate that it would meet the sixth carbon budget for the 2033-37 period.

The High Court found that when Greg Hands, then BEIS minister, signed off the strategy, he didn’t have the legally required information on how carbon budgets would be met.

Ten million tonnes of carbon could be illegally unleashed in the mid-2030s as a result. Doubt was also shed on the 95 per cent of the sixth carbon budget that was accounted for in the government’s estimates.

Mr Justice Holgate also ruled that the strategy breached the Climate Change Act by failing to provide enough detail on the emissions savings, leaving parliament and the public in the dark.

This lack of transparency was a persistent theme of the summer court case. “We were surprised with the extent of critical information revealed in court, when it should have been available to the public from the outset,” said ClientEarth lawyer Sophie Marjanac.

“The fact that it has only seen the light of day because of our lawsuit reveals a concerning lack of transparency.”

What’s next for the UK government’s net zero strategy?

As per the July ruling, the government now has until the end of March 2023 to produce a revised strategy, detailing how its policies will actually achieve its climate targets.

“The claimants did not seek to impose a specific mix of policies,” ClientEarth explains. “The judgment instead addresses the overarching principles of transparency and consistency with carbon budgets that the Government must adhere to in preparing the revised strategy.

“However, the UK Climate Change Committee has identified a number of areas where policy is currently the least robust and credible, including the decarbonisation of buildings, aviation, industry, agriculture, and land use.

“It has also emphasised the need to move further and faster away from fossil fuels to address the cost of living crisis.”

A government spokesman tells reporters, “The net-zero strategy remains policy and has not been quashed.”

The UK has already launched a review of its strategy, led by former energy minister Chris Skidmore, which is due to be submitted by the end of the year. The MP will be looking at the most pro-business way of reaching net zero, according to a statement from BEIS.

Could other European countries hold their governments to account for net zero?

The UK became the first major economy to commit to net zero in June 2019 - a month after declaring a climate emergency following pressure from Extinction Rebellion protesters.

Later that year, EU leaders signed up to reach climate neutrality by 2050 under the European Green Deal. Specific targets have been agreed for individual countries; Germany and Sweden, for example, have an earlier target of 2045.

As well as taking direct action, campaigners are increasingly heading to court to tackle the chasm between their country’s words and actions.

While there might not be any direct implications for Europe, this case does demonstrate how a court might scrutinise a climate plan elsewhere, ClientEarth suggested.

This win takes its place amongst a string of recent cases against governments accused of inaction on climate change and inadequate climate plans.

One example is the successful litigation by Friends of the Irish Environment in the Republic of Ireland that led to a 2019 Supreme Court decision that the UK ruling drew heavily on.

Internationally, the UK has also committed to reduce its emissions by at least 68 per cent by 2030 from 1990 levels, as part of its nationally determined contribution (NDC) under the Paris Agreement.

Traffic fumes may impair your thinking. These simple steps can help

What is greenhushing? The greenwashing tactics you might overlook

Resurrected mammoths could be roaming the Arctic by 2030